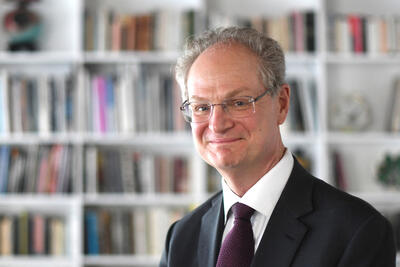 A celebrated chemist, accomplished administrator, and longtime member of the Berkeley community, Paul Alivisatos assumed the role of Executive Vice Chancellorand Provost (EVCP) for the UC Berkeley campus on July 1, 2017.

In addition to his role as EVCP, Alivisatos is the Samsung Distinguished Professor of Nanoscience and Nanotechnology, the founding Director of the Kavli Energy Nanoscience Institute, and Director Emeritus of Lawrence Berkeley National Laboratory (Berkeley Lab), where he remains a senior faculty scientist. He also holds professorships in UC Berkeley’s departments of chemistry and materials science. As EVCP, Alivisatos worked in close partnership with Chancellor Carol Christ, and played a critical role in developing and implementing her vision and priorities for the Berkeley campus. He also had responsibility for the planning, development, implementation, assessment, and improvement of all campus academic programs, policies, and supporting infrastructure.

After a successful tenure as Director of Berkeley Lab, Alivisatos was appointed to be UC Berkeley’s Vice Chancellor for Research in March 2016. In that position, he began a review of Berkeley’s research units, institutes, and centers; fostered new faculty connections for interdisciplinary research through the creation of Berkeley Collaborative Research Opportunities; oversaw the search for the dean of the new Division of Data Sciences; and, in collaboration with the Vice Chancellor for Undergraduate Education, sponsored a series of fora aimed at assessing and strengthening current opportunities for undergraduate research. He also began an end-to-end review of research funding systems and processes on the campus.

As Director of Berkeley Lab from 2009 to 2016, Alivisatos led the development of new buildings for computational research, design efficiency, solar energy research, and biological sciences. He spearheaded several strategic initiatives including a major push in the realm of energy innovation; an effort to use microbial life to improve clean energy, environment, and health; an early-stage proposal to upgrade the Lab’s Advanced Light Source; and programs to harness the computing and data revolution to greatly advance scientific discovery.

Alivisatos received his Bachelor's degree in chemistry in 1981 from the University of Chicago and his Ph.D. in chemistry from Berkeley in 1986. He joined the campus as a faculty member in 1988. Alivisatos is a founder of two prominent nanotechnology companies, Nanosys and Quantum Dot Corp, now a part of Thermo Fisher. He is also the founding editor of Nano Letters, a publication of the American Chemical Society, and formerly served on the senior editorial board of Science magazine, a publication of the American Association for the Advancement of Science.