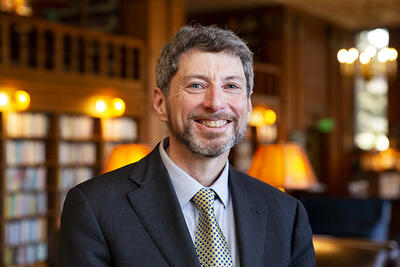 Benjamin E. Hermalin  is the University of California Berkeley's  executive vice chancellor and provost (EVCP),  and holds professorships both in the Economics Department and at Berkeley Haas. In the latter, he is the Thomas & Alison Schneider Distinguished Professor of Finance.

He received his PhD from MIT in 1988, the same year he joined UC Berkeley as an assistant professor in the Department of Economics and the School of Business. He became a full professor in 1998. From 1999-2006 he was the Willis H. Booth Chair in Banking & Finance. He received the Schwabacher Award for outstanding teaching and research in 1993 and the Earl F. Cheit Outstanding Teaching Award in 1991.

From 1999 to 2002, he served as the Berkeley Haas Associate Dean for Academic Affairs and Chair of the Faculty. He was the Interim Dean of Berkeley Haas for most of 2002. He served as the Economics Department Chair from 2005 until 2008. He served from 2009 until 2012 (chair, 2011-12) on the campus’s Budget Committee, which reviews all academic personnel matters on the campus, including appointments, tenure, and promotions. He is a former co-editor of the RAND Journal of Economics. In 2014-15, he was the Vice Chair of the Academic Senate and served as Chair from fall 2015 until spring 2016. He was the vice provost for the faculty from 2016 to 2022. His areas of research include corporate governance, the study of organizations—especially leadership, industrial organization, and law and economics.