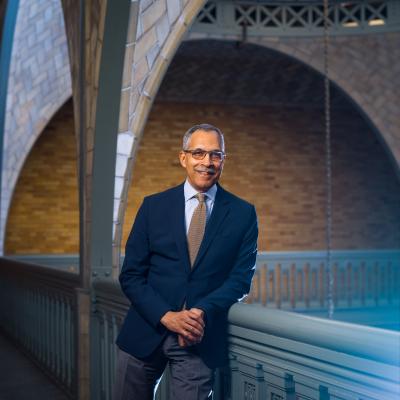 Claude M. Steele began his tenure as the Executive Vice Chancellor and Provost at UC Berkeley on March 31, 2014. Reporting to and working in close partnership with the Chancellor, the EVCP plays a critical role in developing and implementing UC Berkeley's vision and priorities and is the Chancellor's leading senior executive responsible for their execution and implementation.

As the chief academic officer of the Berkeley campus, the EVCP has leadership responsibility for the planning, development, implementation, assessment and improvement of all academic programs, policies and supporting infrastructure.

In addition to serving as executive vice chancellor and provost, Steele has an appointment as Professor in the Department of Psychology and the Graduate School of Education.

Claude M. Steele served as the I. James Quillen Dean for the School of Education at Stanford University from 2011 - 2014. As dean he led the school toward a deeper engagement in public education, including the renewal and expansion of a partnership between the school and the San Francisco Unified School District.

From 2009 - 2011, Steele served as the 21st Provost of Columbia University, where he led and implemented academic policies and plans for the university, including a major initiative to enhance support for the basic sciences. While at Columbia, he was responsible for managing the work of the university’s faculty, departments, research centers and institutes, as well as oversight of the university’s budget and financial planning.

Before joining Columbia University, he was a faculty member at Stanford University from 1991 - 2009, holding appointments as the Lucie Stern Professor in the Social Sciences, as director of the Center for Comparative Studies in Race and Ethnicity, and as director of the Center for Advanced Study in the Behavioral Sciences. He is recognized as a leader in the field of social psychology and for his commitment to the systematic application of social science to problems of major societal significance.

EVCP Steele's research focuses on the psychological experience of the individual and, particularly, on the experience of threats to the self and the consequences of those threats. His early work considered the self-image threat, self-affirmation and its role in self-regulation, the academic under-achievement of minority students, and the role of alcohol and drug use in self-regulation processes and social behavior. While at Stanford University, he further developed the theory of stereotype threat, designating a common process through which people from different groups, being threatened by different stereotypes, can have quite different experiences in the same situation. The theory has also been used to understand group differences in performance ranging from the intellectual to the athletic.

EVCP Steele has been elected to the National Academy of Sciences, the National Academy of Education, the American Academy of Arts and Sciences, and the American Philosophical Society. He is a member of the John D. and Catherine T. MacArthur Foundation Board of Directors, and the Board of the Russell Sage Foundation. He has received numerous fellowships and awards. He was the recipient of the Dean's Teaching Award from Stanford University. The American Psychological Association has bestowed on him the Senior Award for Distinguished Contributions to Psychology in the Public Interest and the Distinguished Scientific Contribution Award (1998). The American Psychological Society presented him with the William James Fellow Award for Distinguished Scientific Career Contribution (2000). The Society for the Psychological Study of Social Issues awarded him the Gordon Allport Prize in Social Psychology (1997) and the Kurt Lewin Memorial Award (1998). He received the Donald Campbell Award from the Society for Personality and Social Psychology (2001).

For more information and to read a Q&A with EVCP Steele, visit: http://newscenter.berkeley.edu/2014/01/13/steele-named-evcp/